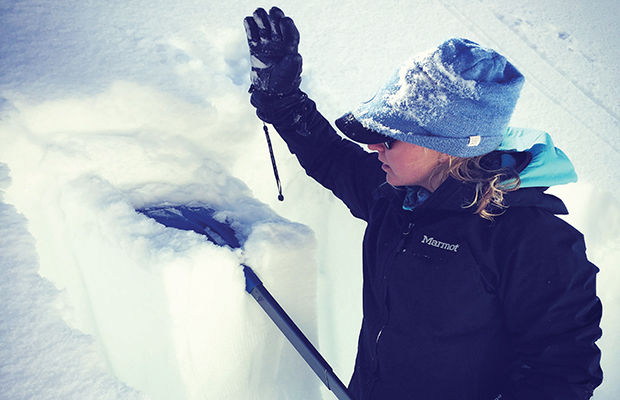 A student in a Telluride Avalanche School Level 1 class does a compression test with a shovel to test the stability of the snowpack. [Photo by Josh Butson] 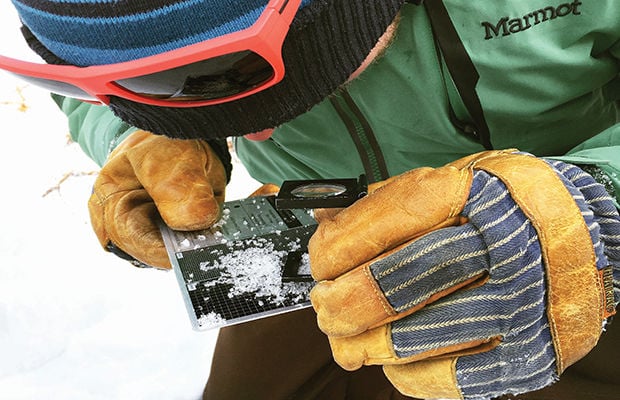 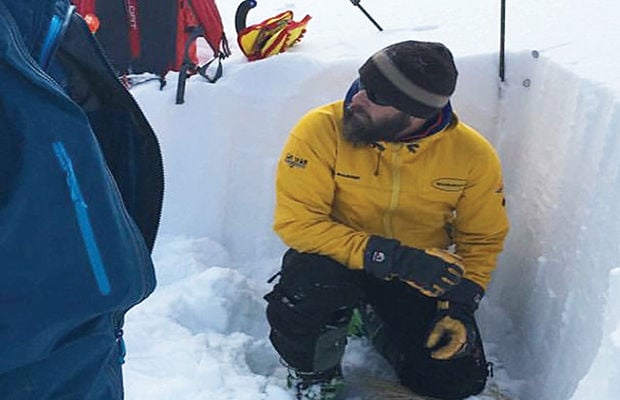 Telluride avalanche educator Josh Butson shows a Level 1 class how to dig a pit to analyze the weak layers in the snowpack. [Photo by Sharon West]

A student in a Telluride Avalanche School Level 1 class does a compression test with a shovel to test the stability of the snowpack. [Photo by Josh Butson]

Telluride avalanche educator Josh Butson shows a Level 1 class how to dig a pit to analyze the weak layers in the snowpack. [Photo by Sharon West]

Telluride backcountry skier Brian O’Neill, who was the first one down the Bear Creek run Nellie that day, ski cut the slope. But he wasn’t fast enough.

The slab of snow shattered above him and knocked him off his feet as it spider-webbed out in all directions. One ski came off. He tried to roll out of the avalanche, first to one side, then the other. When he realized he was about to go for a terrifying ride, he kicked off his other ski so it wouldn’t pull him under or injure him.

“At this point, I knew I was getting sucked in,” O’Neill said. “You’re inside this dark space, fighting and sweating and trying to stay as close to the surface as you can. … You don’t realize how fast you are going. It seems like everything slows down.”

At that point, O’Neill started swimming, trying to stay on top of the snow while flying headfirst down the hill. He went weightless twice as he plummeted over two cliffs. There was so much snow falling with him that the “thud” he expected as his body hit the ground never came. Then a huge chunk of snow hit him in the back of the head, exploding two cervical vertebrae.

Luckily, when the slide came to a stop nearly 2,000 feet below, O’Neill was near the top of avalanche debris that — uncharacteristically — was not hard. He punched upward with his hand and saw blue sky. He began digging himself out and his ski partners arrived to help about 15 minutes later. A rescue by Helitrax and transport to St. Mary’s hospital in Grand Junction swiftly followed.

When the question arises about the best way to avoid getting caught in an avalanche, experts, books and videos invariably cite the rescue trifecta of beacon, shovel, probe, as well as the knowledge of how to properly use them. But those tools are for digging out people who have already been buried. How do you avoid becoming involved in an avalanche in the first place?

The answer is simple, yet surprisingly complicated: good decision-making. Many factors go into deciding whether to ski a particular slope in avalanche terrain: weather, wind, avalanche forecast, slope angle, partners’ tolerance for risk. But there is also a set of common traps — what behavioral scientists call heuristics — that backcountry users fall into when they make decisions based on shortcuts and rules of thumb. Convincing avalanche victims to share their stories, including their mistakes, can be challenging, but it also may hold the key to preventing similar accidents in the future.

An oft-cited statistic in avalanche books is that more than 90 percent of accidents are triggered by the victim or someone in the victim’s party. Telluride-based guide Josh Butson takes that statistic a step further. The avalanche educator and owner of San Juan Outdoor Adventures and the San Juan Outdoor School says 90 percent of all avalanche accidents are directly related to the human factor, i.e. faulty decision-making.

If those involved in avalanche accidents would relate their stories and report the conditions leading up to the accident, including the heuristic traps they fell into, it would undoubtedly further avalanche education by adding to the current body of knowledge. But getting people to talk can be difficult. Butson, who hosts a free, winter-long, Monday night avalanche awareness forum at the Telluride Town Hall, says he has a tough time finding people to speak at his close calls forum.

“People are ashamed,” Butson said. “They don’t want people to know. They are scared of being judged by their peers, and more so from their peers that don’t have the education and the knowledge to know why they are (in avalanche terrain) in the first place.”

It’s easy to play Monday morning quarterback and analyze people’s choices and why they were wrong in hindsight. But Butson says backcountry recreationists should use the mistakes of others to learn, not to judge them unfairly.

“The goal with all avalanche accidents is to take home what didn’t work, why it actually happened and (to) use it to educate yourself,” Butson said.

The Colorado Avalanche Information Center provides daily avalanche forecasts for each of the state’s 11 mountain zones. The local Telluride forecaster is responsible for both the Northern and Southern San Juan zones, an enormous area that covers the San Juan and Rio Grande National Forests and spans all the way to the San Luis Valley in the east and the New Mexico state line in the south. The Northern San Juan Mountains are also home to arguably one of the sketchiest Continental snowpacks in the country, with danger ratings that can vary wildly from one type of terrain feature to another.

It can be difficult for one forecaster to cover such a large and variable amount of terrain. Partly for that reason, the CAIC relies on field reports from other backcountry users to help craft its daily forecast. The website has a section for people to report their observations of avalanche activity. For example, after his backcountry tour on Jan. 16, CAIC forecaster Jeff Davis reported shooting cracks and collapsing on a southeast aspect above treeline near Ophir, probably the result of a wind slab.

But Davis is an avalanche professional. Convincing the public to report triggering an avalanche can be an uphill battle. When there is not a high-profile rescue involving multiple agencies, the CAIC might never know about an avalanche.

With the ease of reporting an avalanche with just a few keystrokes also comes the ubiquity of online criticism, something Toepfer thinks prevents people from sharing their experiences.

“Part of it is that they are embarrassed,” Toepfer said. “In the social media world, we are all afraid of being crapped on by people we know or don’t know, who weren’t there on the scene. … They are scared and they don’t want to get called out on anything.”

However, Toepfer said, once the CAIC tracks down those involved in an accident, they are almost always willing to talk about it. The nonprofit organization, he said, has a reputation for not passing judgment and not scolding people who make mistakes. They just want the facts. The CAIC doesn’t report the names of those involved, and also gathers unrelated statistical information, such as the brand of beacon the members of the group were using. Their motto is: The more information, the better.

“The bottom line is: You need to report those things,” Toepfer said. “It would be incredibly beneficial to the overall riding public for a multitude of reasons. It will improve our forecasts. If we don’t hear of anyone getting involved in an avalanche, we might drop the danger. It really helps make us a better forecaster.”

O’Neill admits he fell victim to a few common heuristic mistakes just before his accident, including familiarity and scarcity.

O’Neill and others had been skiing the slope that slid a few days before with no signs of instability, so he felt comfortable on the terrain (familiarity). The accident took place in 2005, before the winter 2008-09 opening of the Telluride Ski Resort’s Revelation Bowl lift, which deposits skiers higher on Gold Hill and closer to the expansive, yet dangerous sidecountry of Bear Creek. So O’Neill had a bigger hike ahead of him than the backcountry skiers of today, and he wanted to get to the untracked powder before the 50 or so people marching up behind him (scarcity).

In his haste, he did not check the weather report, and he didn’t realize an overnight wind had deposited snow directly onto the slope he was about to ski, creating a slab. He also failed to notice the accumulation of rime, a thin crust of crunchy snow, on the ski area boundary rope, which could have indicated wind direction and added more weight to already-weak buried layers of the snowpack.

“I got in that mentality of ‘I want to be first. I want to be ahead of everybody up there,’” O’Neill said. “I missed signs in my eagerness to get up there. … Not reading the signs is one of the basics. I still kick myself.”

Other common heuristic traps include assuming a slope is safe because others have recently skied it (social proof), sticking to a plan to ski a certain run, even in the face of mounting evidence that it is dangerous (commitment) and following people or allowing them to choose the route because they are perceived to have the most experience and training (expert halo).

O’Neill was not a neophyte at the time of his accident. He has been skiing since he was three years old. A Telluride resident since 1989, he coached the moguls team for 10 years, spent six years as a heli-ski guide in Alaska and later guided with Telluride Helitrax. He has been ski mountaineering all over the world, including on the world’s highest peaks: Aconcagua, Elbrus and others. He is knowledgeable about avalanches and uses somewhat esoteric avalanche terms like “bridging” (the ability of a stiff slab of snow to spread out the weight of a skier over a large area, making them less likely to trigger an avalanche) in conversation. He knows his stuff.

If an expert like O’Neill can get caught in an avalanche, what about the hordes of less experienced skiers and snowboarders that head into the backcountry of the Northern San Juans every day? Lifelong education and constant vigilance (along with the proper equipment) are the answers, Toepfer said.

Two people have died in avalanches in Colorado this season. A climber was caught, carried and killed on Jan. 16 at St. Mary’s Lake, and a Crested Butte snowmobiler died on Jan. 21 at Ruby Peak.

Even though the danger level for the state’s mountain ranges has recently hovered around low or moderate on the CAIC website (a rarity for mid-winter in a Continental snowpack), there’s no reason to get complacent, Toepfer said.

“When I travel in the backcountry, I never travel with the thought that it’s in generally safe avalanche conditions,” Toepfer said. “I know there is a bullet in the chamber out there somewhere that has my name on it. The point is: Always bring your ‘A’ game into the backcountry. Mother Nature dictates the rules.”

O’Neill said his accident has turned him into a more conservative skier, especially when it comes to making decisions. He does so now much more slowly and deliberately. He is also forthcoming about sharing information about his accident and the mistakes he made leading up to it. His story is well-known around Telluride.

“I think it’s inappropriate to not report things,” O’Neill said. “What is the point of not learning and not sharing education?”

Sorry, there are no recent results for popular images.