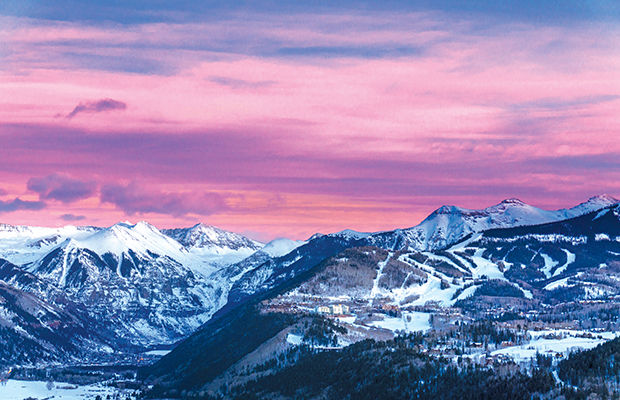 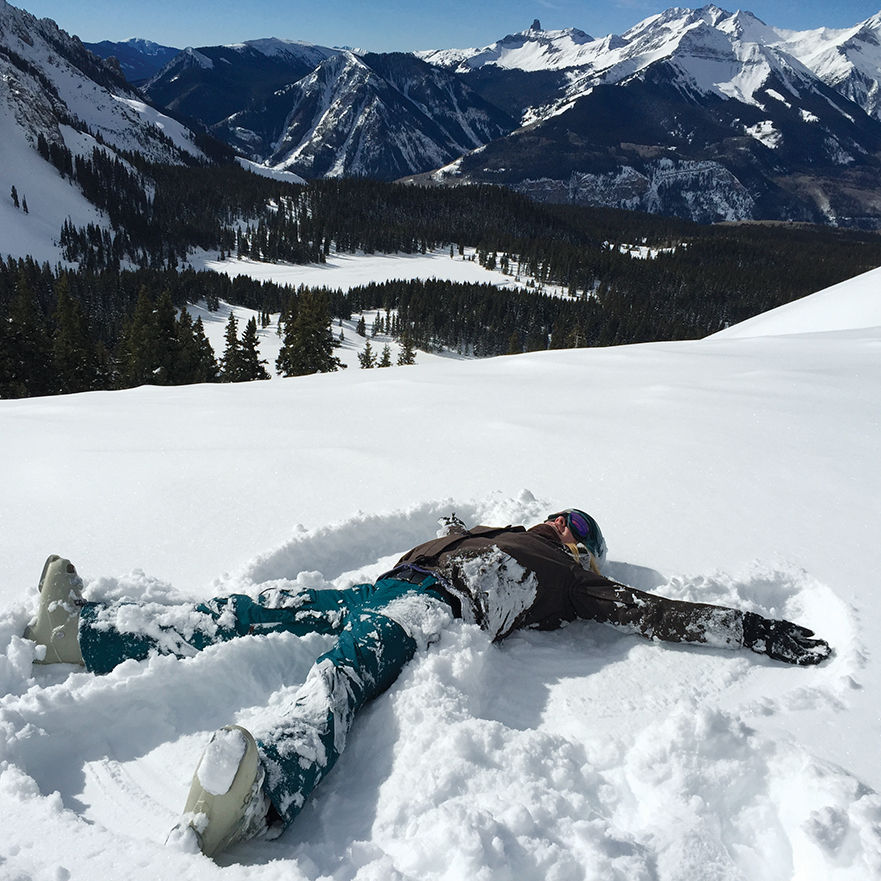 Caitlin Ketel celebrates a few new inches of snow with a snow angel at the top of lift 12 in December 2014. [Photo by Heather Sackett] 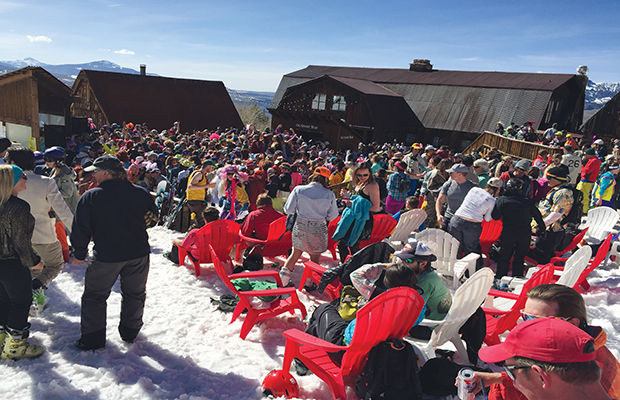 Caitlin Ketel celebrates a few new inches of snow with a snow angel at the top of lift 12 in December 2014. [Photo by Heather Sackett]

As snow fell from the sky early this week, shovels and snowplows hurried to clear it from roads, sidewalks, roofs and parking spaces. It was a Sisyphean task. In skier parlance, it was dumping, nuking, puking, with no end in sight. When the skies finally cleared, 26 inches of snow had fallen on the Telluride Ski Resort. It was the third significant storm of the season and it wasn’t even opening day yet.

Although superstitiously reluctant to talk about it for fear of jinxing things back into a dry pattern, locals and resort officials hope the early season snow is an indication of things to come for the 2015-16 season. With a record-breaking 2014-15 season for skier visits, additional flights into the area, recent lodging purchases, a renewed focus on economic sustainability, an ambitious goal to be the No. 1 ski resort in the world and a “Godzilla El Niño” that promises to bring big snow to the area, Telluride Ski Resort is poised for its biggest year yet.

The weeks before opening day (Nov. 26 this year) saw more than three feet of snow fall on the resort, setting up a 38-inch early-season base. And forecasters are predicting more where that came from. According to OpenSnow.com, which forecasts snowstorms for Colorado resorts and specializes in predicting powder days, Telluride is expected to accumulate between 91 and 119 percent of average snowfall for the season. Telluride’s snowpack was at 91 percent of average snowfall as of Nov. 16.

“We are trying not to jinx it, but we want it bad,” Telski Executive Vice President Robert Stenhammer said of the snowy storm cycles El Niño can bring. “It just adds to the opening day momentum.”

Telluride saw a record number of skier visits during the 2014-15 ski season — 478,000. That’s compared with 454,000 the previous year, and it was roughly 8,000 better than the 470,000-skier-visit goal Telski set for itself. This season, the resort is looking to boost those numbers even higher and has several strategies in place to help accomplish it. For the past three years, the readers of luxury travel magazine Condé Nast Traveler have voted Telluride the No. 1 ski resort in North America. But officials are aiming higher.

“Our goal is to be the No. 1 resort in the world,” Stenhammer said.

To turn that goal into a reality, Telski is working to address one of its biggest issues: accessibility. The resort is too far for a driving day trip from any major metropolitan area, and the Telluride Regional Airport on Deep Creek Mesa no longer offers commercial service. That’s why Colorado Flights Alliance has stepped up to fill the void and is offering new flights this year to Montrose from more destinations, including the highly sought-after New York market, with service to LaGuardia Airport. Other added routes include Las Vegas, Chicago and Los Angeles, as well as increased service on routes to Dallas/Ft. Worth and Phoenix.

Beginning Dec. 17, there will be daily flights from Dallas/Ft. Worth, Houston and Chicago. Dec. 19 will kick off weekend flights from LaGuardia, Newark, Los Angeles, San Francisco, Las Vegas, Phoenix and Chicago. The flights will run throughout the ski season, with some ending March 27 and others on April 4.

“Guests and residents alike now have multiple, varied options to travel non-stop to and from major hubs across the country, easily connecting the whole of North America and the world,” Colorado Flights Alliance CEO Matt Skinner said in a press release.

The search for a new CEO

But along with the expansions and record visits, there is one looming uncertainty: Who will lead the resort into the future and shape its vision? Telluride Ski Resort President and General Manager Greg Pack, who came on board in fall 2013, left the company a few weeks ago. There will not be a replacement hired in time for the start of the ski season.

“We are just being patient and trying to find the right fit,” Stenhammer said of the search for a new GM. “It’s hard to tell if it will happen this ski season. When we find the right person, we will know.”

Telluride Ski Resort owner Chuck Horning said the resort is in the process of looking for a new manager with certain essential qualities, including a deep knowledge of ski resort operations, familiarity with the ski industry and the ability to be a visionary thinker.

“They need to be thinking about where we need to go to get sustainable,” Horning said.

Economic sustainability is a term Horning uses a lot, but it’s not just a buzzword at Telski these days. The company has been taking steps toward creating a community in which business is booming year-round and not just during the already-packed holidays. Telski is also thinking outside the box when it comes to addressing the employee housing shortage.

Telski, along with the towns of Telluride and Mountain Village, the Telluride Tourism Board, merchants and other local stakeholders, has been trying to boost business during times that have been traditionally slow. The Holiday Prelude, a two-week series of family-friendly events that takes place before the busy Christmas week, is an attempt at creating that sustainability. The Prelude returns for the third year on Dec. 2, with the aim of attracting visitors to enjoy skiing, shopping and twinkling holiday lights.

“Between Thanksgiving and Christmas we are really weak, but there are ways to fix that,” Horning said. “We are really focused on fixing these weak spots. It will improve the quality of life for everyone who lives here.”

Another piece of the economic sustainability puzzle is employee housing. Horning is keenly aware that many of the resort’s 1,100 winter workers have trouble finding a place to live. Telski has been thinking outside the box to remedy the situation. Of the 160 units in Big Billie’s Apartments (the resort-owned employee housing complex in Mountain Village), 55 have been converted to double occupancy rooms to help alleviate the housing shortage. This is the second season double occupancy will be allowed there.

This fall the company also bought the Rico Hotel 22 miles south of Telluride and is in the process of upgrading and renovating the rooms. Stenhammer expects more than 30 employees to be housed there this winter.

“The hotel is a minor thing in the big picture, but Telski is committed to working with those stakeholders to address the [housing] problem,” Stenhammer said.

In recent years Telski has shifted its attention to lodging properties, hospitality and customer service in its multi-pronged approach to reach the top. In 2013, the company bought the Inn at Lost Creek in Mountain Village, its first experiment in owning and operating a hotel.

“If you ever want to feel good about guest service in Telluride, just read the Inn’s TripAdvisor,” Stenhammer said. “It’s so great to see how we embrace our guests here.”

This summer, Telski purchased 35 percent of the Peaks Resort and Spa, a property the ski company had been eyeing since at least 2009. The deal included the management contract, retail spaces, restaurants, spa and the luxury condo complex See Forever Village. Telski will focus on turning the 10-story, 189-room hotel into a paragon of customer service and the cornerstone of Telluride’s lodging properties. Immediate upgrades include replacing the weight room machines and hiring a nutrition expert for the spa.

“Our vision is to restore it to what it once was: one of the best hotels in the ski industry,” Stenhammer said. “We are trying to turn it from an amenity into a destination driver.”

According to Horning, the Peaks purchase is another step toward sustainability.

“We bought the Peaks because it needed to be picked up by somebody that cared and we really care about it,” Horning said. “It’s part of the experience for people who come here.”

But back to the snow

After several summers’ worth of work, the resort has dialed in its snowmaking system to be more efficient and to provide better coverage on connector runs, according to Telluride Ski Resort Operations Manager Jeff Proteau. Snowcats and groomers have been packing the snow down on terrain like Prospect Ridge and Gold Hill.  Little by little, Proteau said, the natural snow combined with the man-made snow has created a decent base.

Proteau said it’s likely the resort will be able to spin Lifts 4 and 5 for opening day. Beyond that, he’s wary of offering season-long snow predictions other than to say he’s cautiously optimistic.

“I don’t want to get too cocky, but it feels pretty good,” Proteau said. “I’m superstitious about weather, but I know what’s happened so far is pretty good and I’m optimistic about this season.”

Sorry, there are no recent results for popular images.