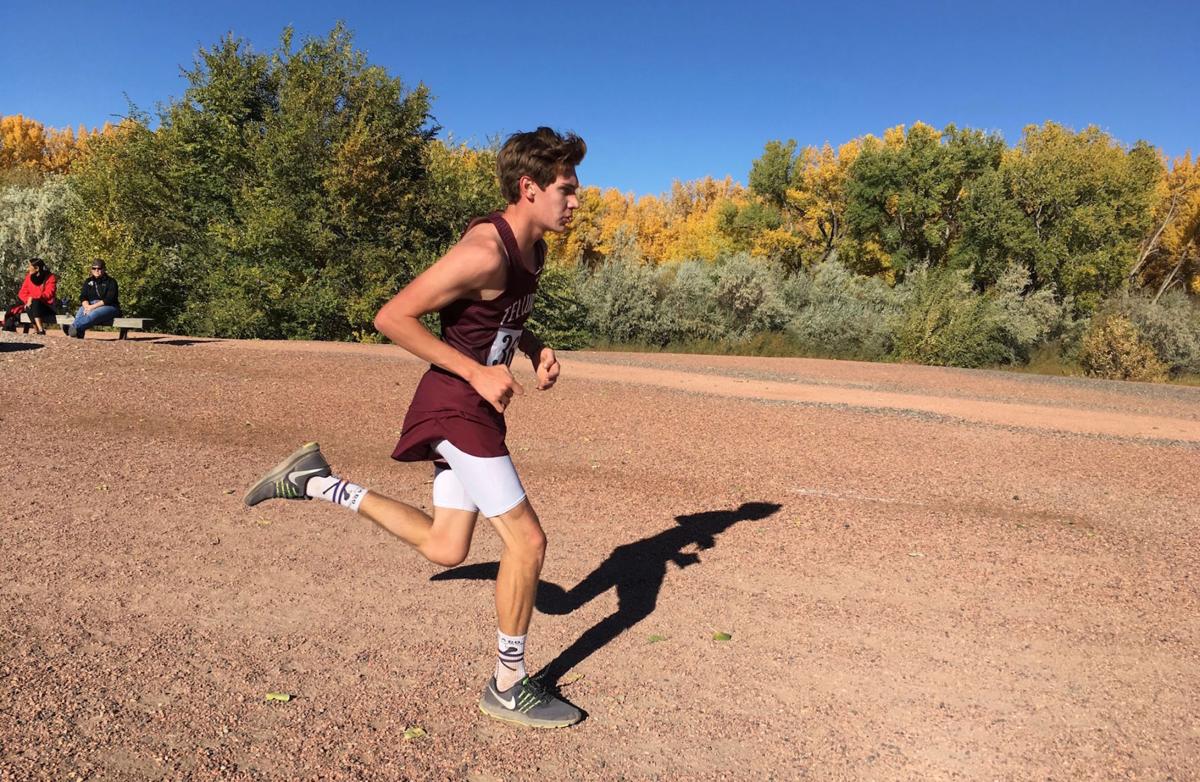 Telluride freshman Cole Paczosa heads toward the finish line en route to winning the 2A Regional title with a time of 17 minutes, 32.02 seconds at Confluence Park in Delta Saturday. (Photo by Dale Strode/Telluride Daily Planet) 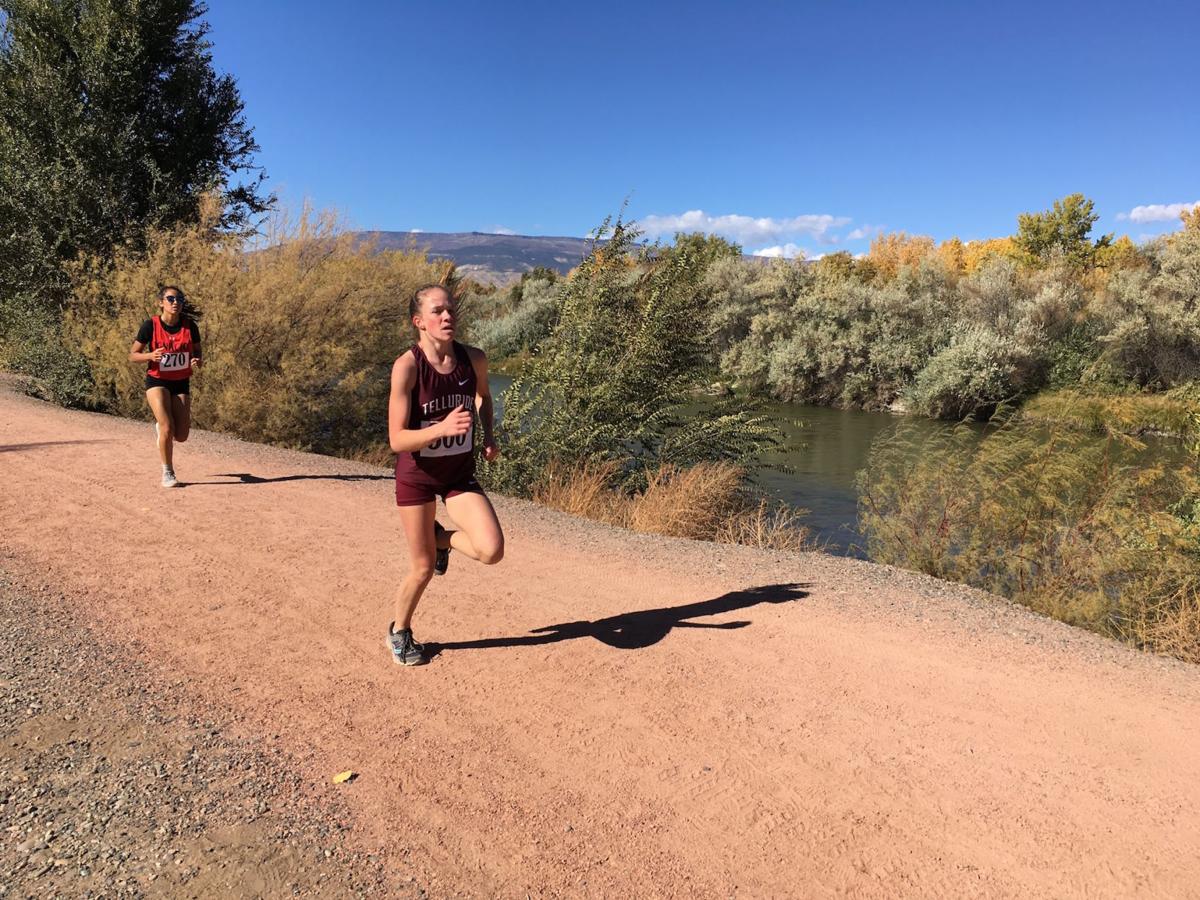 Telluride sophomore Ruby Tanguay heads for a state-qualifying finish Saturday at the 2A Regional cross country race in Delta. She finished 13th with a time of 21 minutes, 46.64 seconds. (Photo by Dale Strode/Telluride Daily Planet)

Telluride freshman Cole Paczosa heads toward the finish line en route to winning the 2A Regional title with a time of 17 minutes, 32.02 seconds at Confluence Park in Delta Saturday. (Photo by Dale Strode/Telluride Daily Planet)

Telluride sophomore Ruby Tanguay heads for a state-qualifying finish Saturday at the 2A Regional cross country race in Delta. She finished 13th with a time of 21 minutes, 46.64 seconds. (Photo by Dale Strode/Telluride Daily Planet)

Paczosa eased away from the field to win the Class 2A Regional cross country title Friday at Confluence Park in Delta.

The Telluride freshman battled gusty autumn winds on the flat 5K course around the expansive park between the Gunnison and Uncompahgre rivers. He crossed the finish line solo — winning in 17 minutes, 32.02 seconds.

Jack Gottsegen and Bryn Peterson, both from Colorado Rocky Mountain School in Carbondale, finished second and third with times of 17 minutes, 41.85 seconds and 17minutes, 57.84 seconds, respectively.

As the regional champion, Paczosa qualified for the State Cross Country Championships Saturday at the Norris-Penrose Event Center in Colorado Springs.

Telluride teammate Ruby Tanguay, a sophomore, will join Paczosa at the state meet. She finished 13th in the girls 2A Regional race, as the top 15 individuals, along with the top five teams, advanced to Colorado Springs.

Tanguay also qualified for state last year as a freshman.

“This was much better than the last race here,” Paczosa said after winning the regional title in Delta. “We had a race here about two weeks ago; a much bigger race. That race was with (different classes) like 2A, 4A. There were much faster teams.”

And a much faster start with a lot more runners. But at during regionals, Paczosa knew he would be racing exclusively against runners from Class 2A schools in the region — Ouray-Silverton-Ridgway, Paonia, Meeker, Crested Butte, Hotchkiss, Mancos, Monte Vista, Ignacio, Dolores, West Grand (Kremmling), Rangely, DeBeque and Caprock Academy (Grand Junction).

He expected a smaller field and a more moderate start at regionals, and he was correct.

“I took over the lead right around a mile in,” Paczosa said. “I had a little bit of company; three or four (runners) until 2 miles.”

A turn in the course enabled him to glance back at the runners behind, he said.

“I could see them, 30 to 40 yards between them. Then, towards the end, I pushed it,” he said. “I pushed myself a little bit so I could maintain the lead.”

He credited Telluride cross country coach Erin Murray with preparing him for the 2A regionals and dealing with the pesky afternoon winds in Delta.

“My coach talked to me about the wind before the race,” he said. “She said you’re not going to run your fastest time because of the wind.”

Murray, instead, had Paczosa concentrate on the tactics of the race and adjust to the wind. His race times entering the regional meet indicated he should be among the leaders in the 2A field, according to his coach.

“I tried to lean forward a little and push myself through the wind,” he said.

Plus, when the course turned to a tailwind, he took advantage with his long, rangy stride.

“This is awesome,” said Paczosa, the son of Courtney Stuecheli and Joseph Paczosa. “Hopefully, I can keep doing this all through high school.”

His coach said he executed the race plan to perfection.

“I’m really proud of him because he learned not to just shoot out of the gate, especially at regionals, where they like to do that,” Murray said, citing the previous race in Delta two weeks ago.

He stayed with the lead group of four through the comfortable opening mile, she said. Murray urged him to make his move in the second mile.

“He got a big lead, and no one ended up catching him,” Murray said. “He did exactly what he needed to do.”

She said that after strong results as a middle school runner, Paczosa entered high school with expectations.

“He’s been progressing through (the season) to this,” Murray said, eager for him to experience the state championships.

On the girls side, Colorado Rocky Mountain School won the regional title with 30 points. Soroco (Oak Creek) was second with 31, followed by Rangely at 32. West Grand was fourth (34) with Paonia fifth (49).

Telluride’s Tanguay rallied over the last mile of the course to claim a spot in the state championships. She placed 13th at regionals in 21 minutes, 46.64 seoconds. The race was won by Ashleigh Gardner of Caprock Academy (20 minutes, 39.49 seconds); Charlize Valdez of Ignacio finished second in 20 minutes, 41.77 seocnds.

She said the wind was particularly troublesome during the girls race at Delta.

“The wind is hard. You’re running against a brick wall of wind,” Murray said.

More disconcerting, she added, was the fact that when they raced in Delta two weeks ago there was no wind at all.

“But she (Tanguay) did great. I said we just want to keep doing better,” Murray said. “And she’s doing that.”