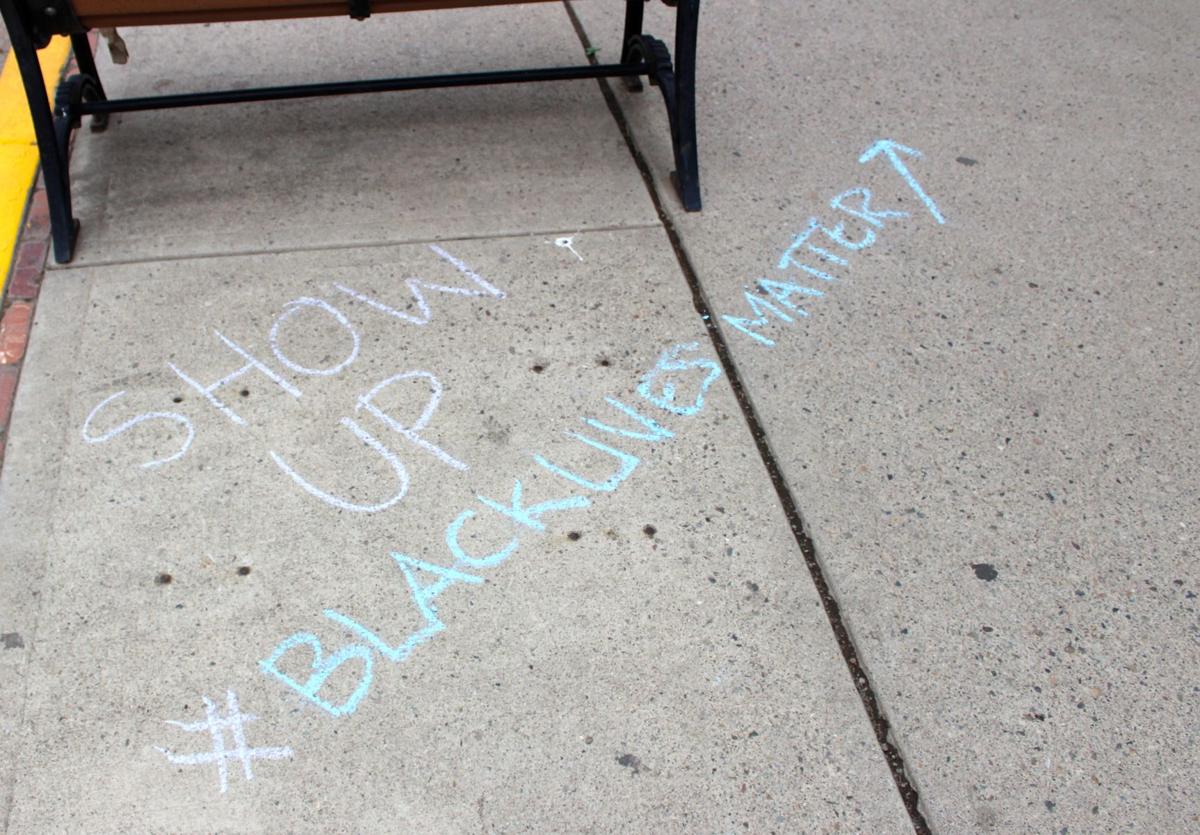 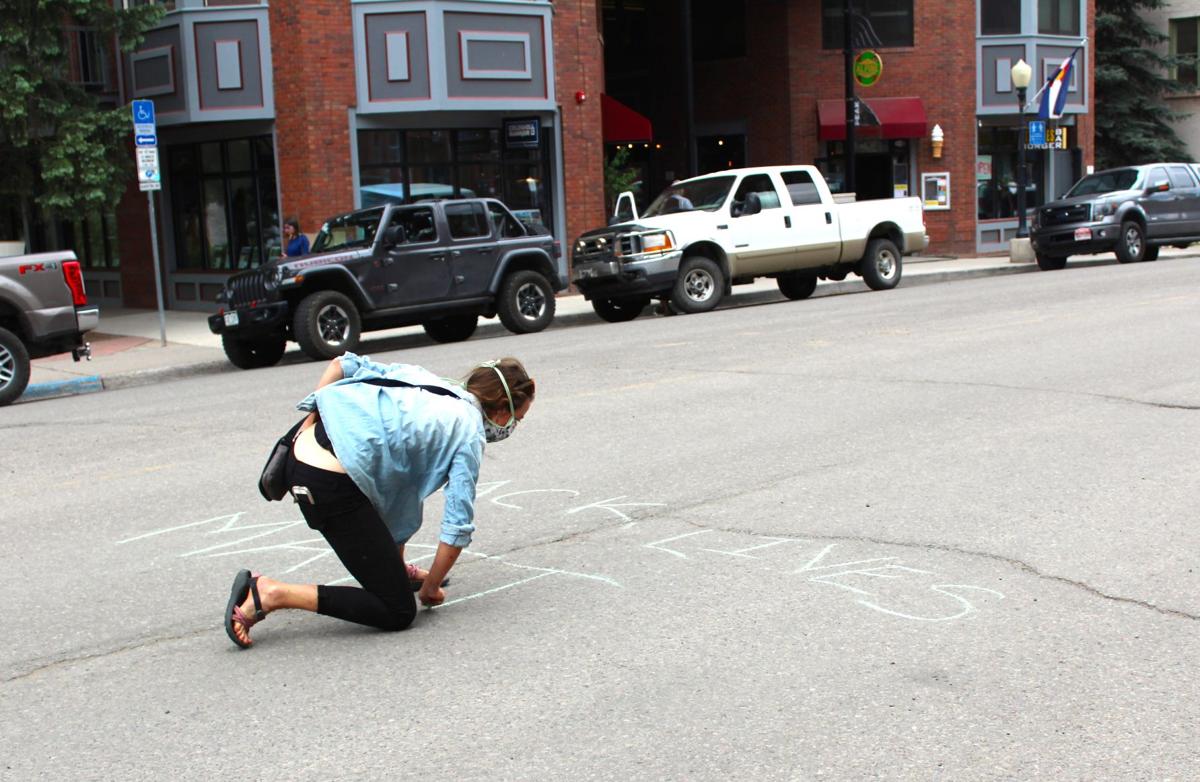 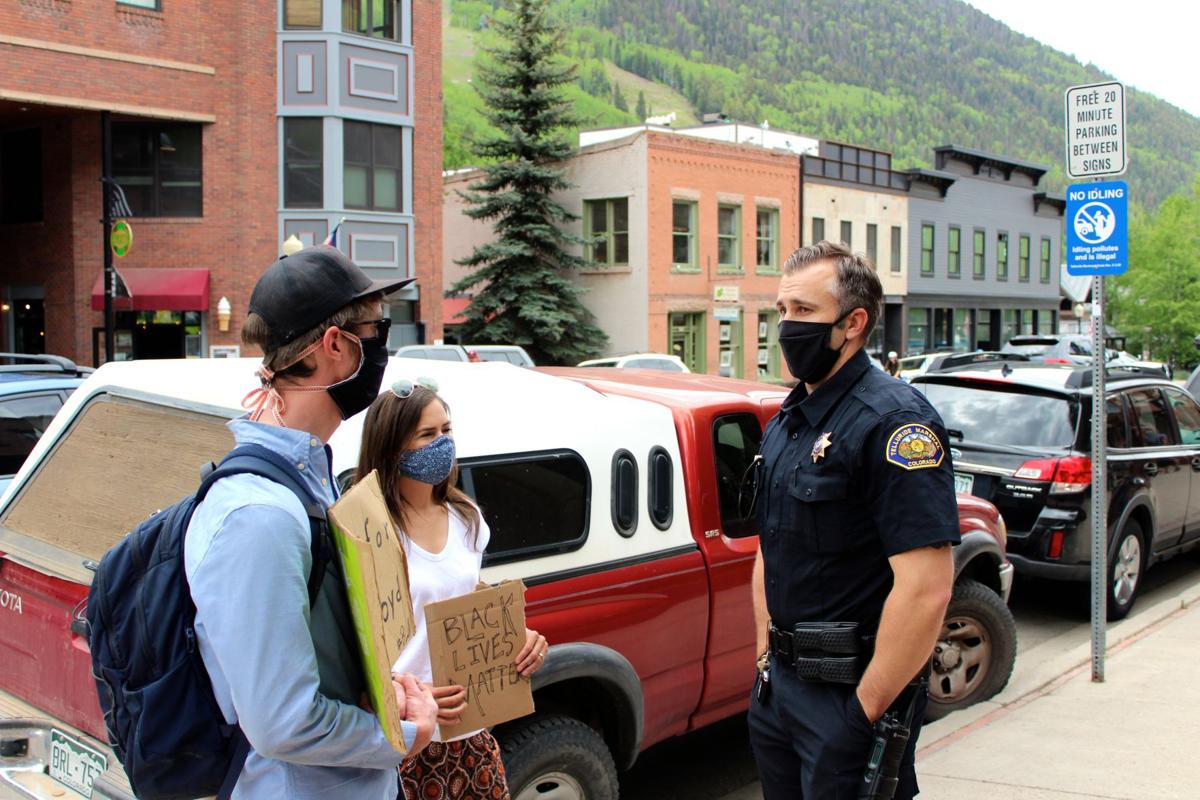 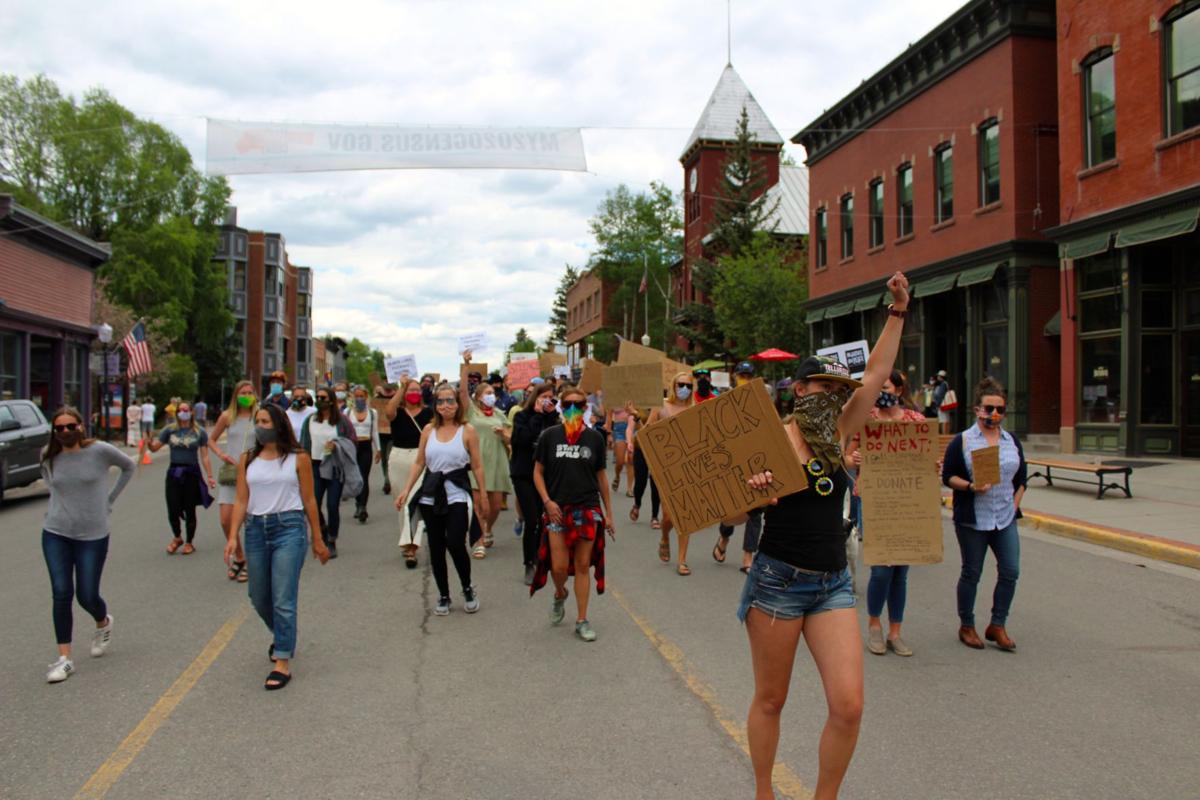 The contingent marched up and down Main Street Monday. 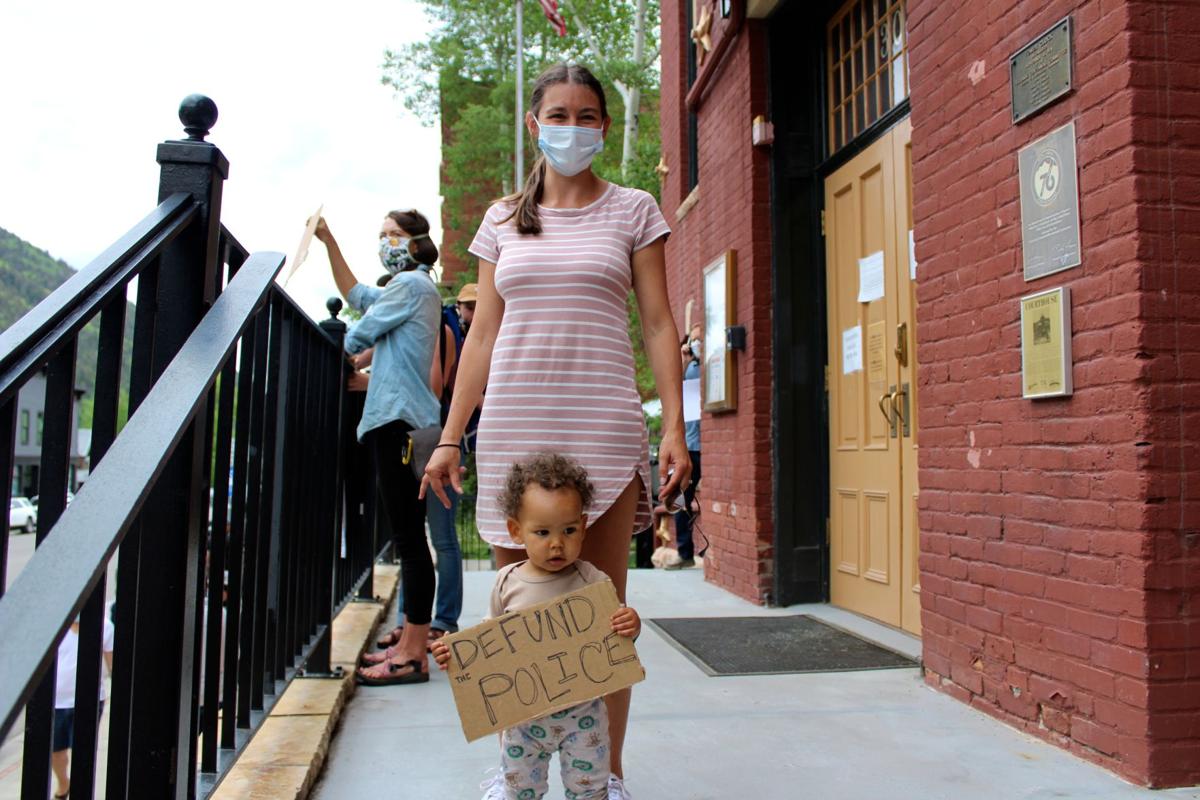 Jackie Distefano-Keokuk and her son Chief, who is holding a "Defund the police" sign, on the courthouse steps Monday. 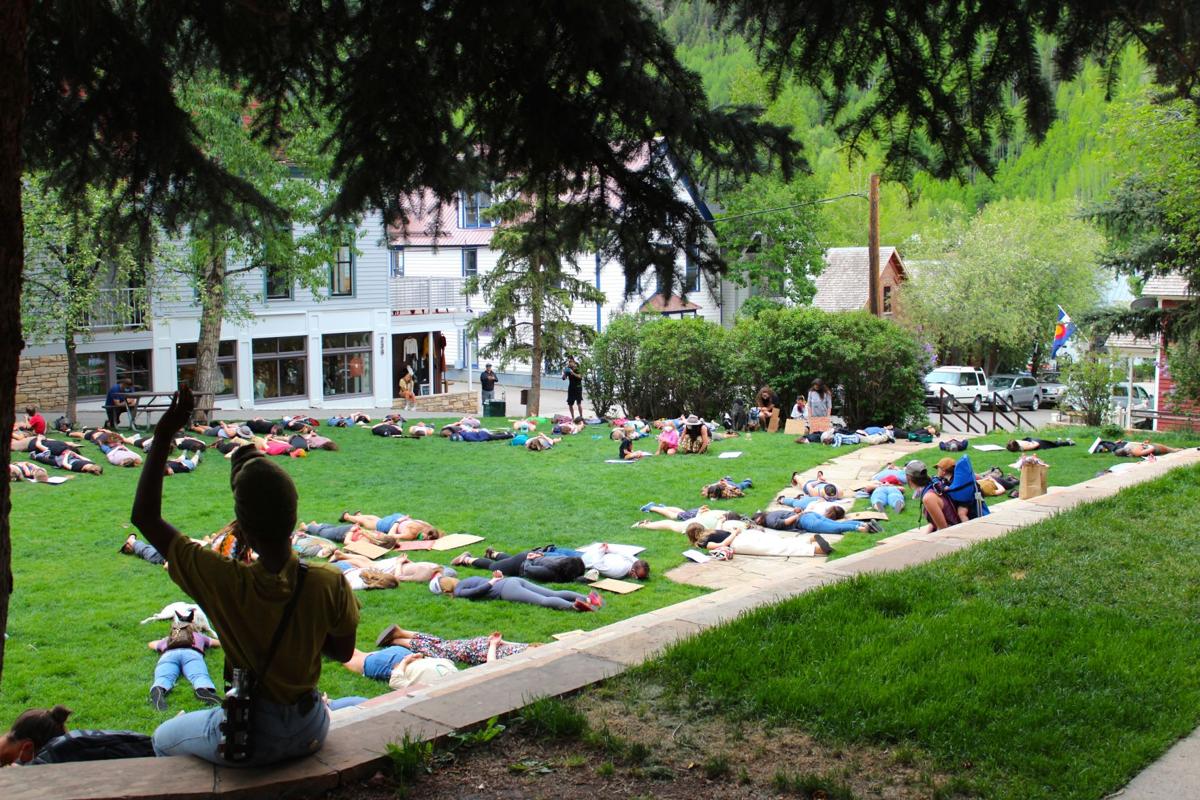 After the march, people gathered in Elks Park for a three-minute moment of silence. Many chose to lay down on their stomachs with their hands behind their backs, the same position George Floyd was in when the officer knelt on his neck. 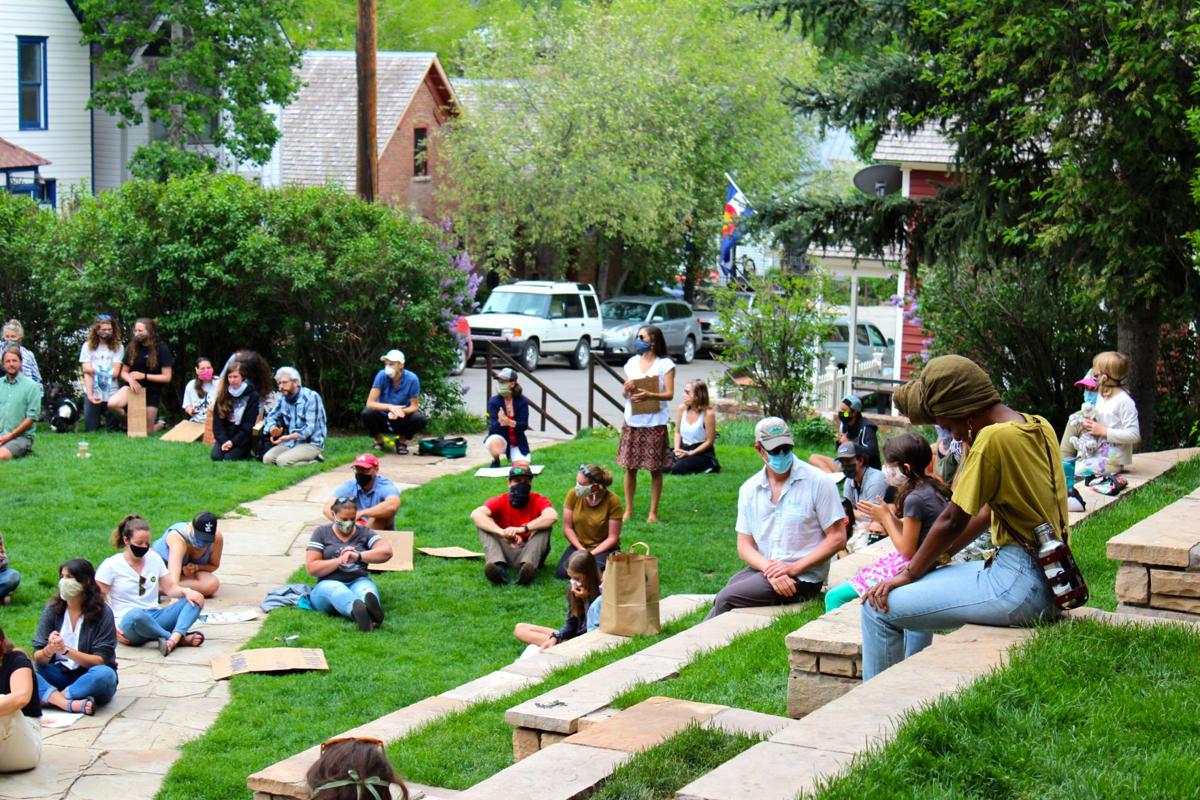 Tellurider Shan Thorpe, who was emotional throughout the demonstration, spoke through tears Monday. 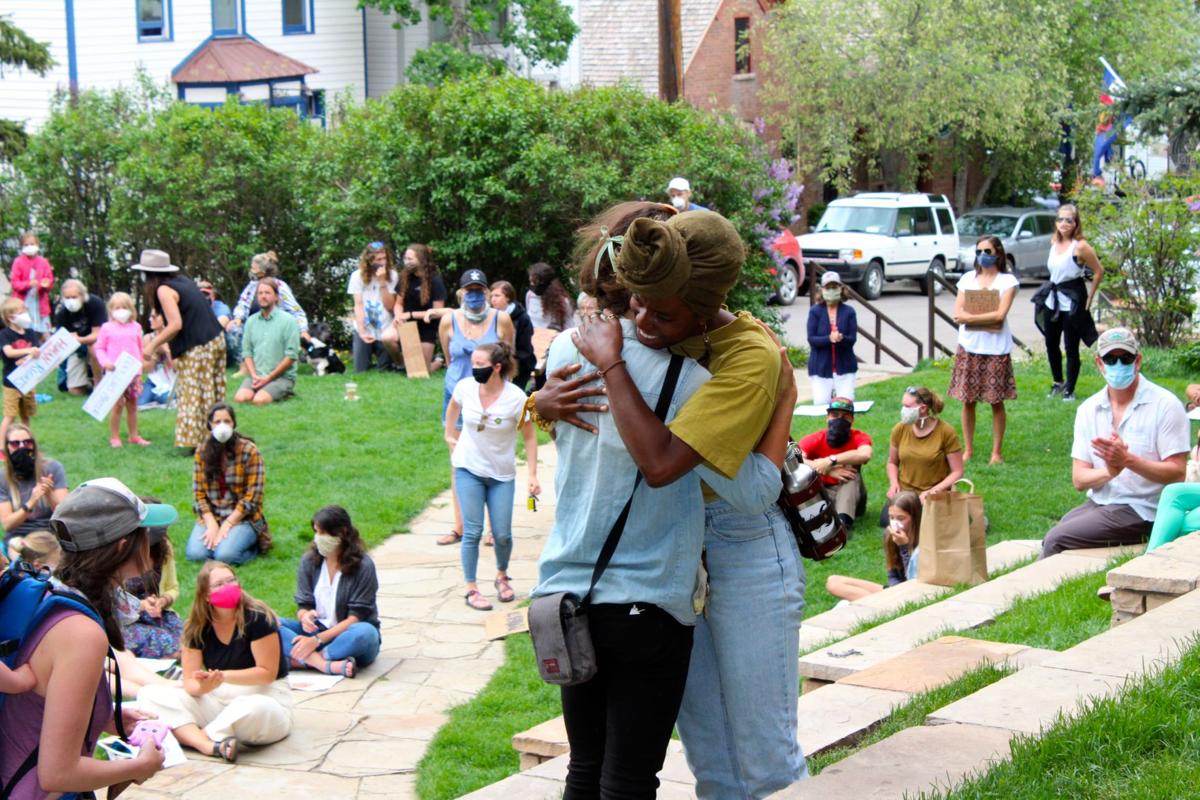 Shan Thorpe and Mara MacDonell hug at the conclusion of Monday's demonstration.

The contingent marched up and down Main Street Monday.

Jackie Distefano-Keokuk and her son Chief, who is holding a "Defund the police" sign, on the courthouse steps Monday.

After the march, people gathered in Elks Park for a three-minute moment of silence. Many chose to lay down on their stomachs with their hands behind their backs, the same position George Floyd was in when the officer knelt on his neck.

Tellurider Shan Thorpe, who was emotional throughout the demonstration, spoke through tears Monday.

Shan Thorpe and Mara MacDonell hug at the conclusion of Monday's demonstration.

One week after a nation watched the horrific death of George Floyd, an African-American man who died when now-former Minneapolis police officer Derek Chauvin knelt on his neck for nearly nine minutes, Telluride held a “Black Lives Matter” demonstration Monday.

Mara MacDonell, who helped organize the march down Main Street, started with a quick speech from the steps of the San Miguel County Courthouse as a crowd of several dozen, many of whom wore facemasks and carried signs, listened. She also wrote “black lives matter” in chalk on the street in front of the courthouse. Midway through the slogan, a UPS truck approached. MacDonell quickly moved to the sidewalk, but the truck stopped, and the driver gestured for her to finish. When she did, the driver clapped his hands and pumped his fist in a sign of solidarity. The crowd applauded as he drove by. He returned the love by beeping his horn.

The contingent walked down Colorado Avenue to the Willow Street intersection. On the way, pedestrians on the sidewalks clapped and cheered the protesters on; some even joined the protest. Several business owners stood in front of their respective stores to do the same.

Telluride Chief Marshal Josh Comte, who attended the demonstration, said he had the same reaction many people had when he saw the cellphone video, which was taken by a bystander, of Floyd’s death.

“I think like most of Americans, I was horrified. It was just a tragic, unnecessary death,” he said.

While many protests around the nation have turned violent, and even fatal in some instances, Monday’s demonstration in Telluride was peaceful, and many participants preached change. The crowd stopped for a moment at the intersection and recognized Comte with applause. Other officers stopped by throughout the demonstration, including Elks Park, where a three-minute moment of silence was held, as well as speeches.

Comte told the Daily Planet it’s “a huge learning opportunity for everybody,” and that his department is “feeling the same thing that everybody else is feeling in the community and throughout the country. There’s frustration that the actions of one labels an entire profession.”

“I think that’s what’s important here with everybody coming out with these protests and letting communities come together to have these conversations,” he said. “Telluride is a very unique town. Everyone here seems to know everybody so you have the opportunity to have these conversations. … It’s good that we can meet like this and hopefully make some positive change.”

After settling in Elks Park, people assumed the position that Floyd was in when he was detained and ultimately died in — prone on his stomach, with his hands behind his back.

Tellurider Shan Thorpe, a young African-American woman who moved to the area from Hawaii last year, spoke to the crowd after a friend urged her to do so. She said she wasn’t even aware of the demonstration before she came to town and saw the gathering at the courthouse. She wept openly during the march and locked arms with her friends. She said she was proud of her newfound mountain community.

When asked how she was feeling after the demonstration dispersed, she smiled, “Blissful.”

“Bliss in the sense of having an open heart. With the injustices that have been continually happening over the years, it’s really challenging to say how as a nation we move forward, especially with this powerful pandemic, so I just have to embody bliss and hope. I’m really proud of my community; this new community that I’ve come into,” she said. “I’ve had a lot of challenges living here, with not seeing people that look like me. … The community that’s here that’s predominantly Caucasian, I feel engaged and welcomed. … Usually, when the streets our quiet, I walk with my ancestors.

“I’m divine, and I’m beautiful. Whoever is willing to receive that and connect with me in this community, I’m here for you. I’m proud of the will and the recognition from these incredible individuals in Telluride. Hands down one of the most amazing places in the world. I truly believe that. Coming form Hawaii and loving it there, it’s a parallel.”

The demonstration concluded with MacDonell and Thorpe sharing a hug as the gathered crowd cheered.

“I’m just so happy that Telluride stood up for racial justice. We are such white-privileged community. We often think that racism doesn’t exist here, but it does, and I think a lot of our Latinx community members can speak to that, as well as other folks of color,” MacDonell said. “We need to do better. I just hope that this is a catalyst for our community to take the next step and continue fighting, and looking at our community and what we can do to make sure that we aren’t perpetuating systems of inequality and racism. “There are so many folks in our community that have done so much work up until this point to make all this possible, especially the leaders in the Latinx community (Latino Advocacy Committee) has been really been doing that for years and deserve so much credit for the progress that has been made in this community regarding racial justice and equity. They’re the folks to turn to locally, and black and brown voices need to be amplified. White people need to fix this problem.”

“Things like this, speaking out, since we do live in such an isolated area that is predominately white,” said Enright, who held a “Justice for George Floyd” sign throughout the protest. “It’s important for people like myself, who do have white skin, to speak out that this sort of injustice is not OK, that we must work together with our local leaders, town councils, mayors and police to make sure that the problems that happen in other parts of the country don’t happen here.”

Smith said “it’s sickening how it keeps happening over and over again,” as he held a handmade sign that read “White silence is violence.”

“I feel like something needs to change and all the peaceful protests in the past hadn’t gotten anywhere. That’s why it’s hard to condemn these people who are acting out,” he said. “I’m here because I feel like we are blessed in a lot of ways living in an isolated community that also doesn’t remove us from the problem. I think it’s easy to ignore it and act like nothing is going on because you don’t want to feel uncomfortable. I feel like it’s on all of us to feel uncomfortable about this and do whatever we can.”